A gathering place for jewelry makers to share ideas, make friends, & to have fun

Paraiba tourmaline is one of the most precious, rare and valuable gemstones in the world. They have a unique, glowing neon colour which appears to shine out from within the gem.

While jewellery displaying quality gems was once only within reach of the privileged rich, these days outstanding creations are now available to everyone, regardless of their budget – thanks to affordable, reputable online retailers such as The Jewellery Channel.

The following guide will explore some interesting facts about Paraiba tourmaline.

In the rough, Paraiba tourmalines do not display their unforgettably vivid colours – it is only when they are cut that they magically appear to glow in any light. 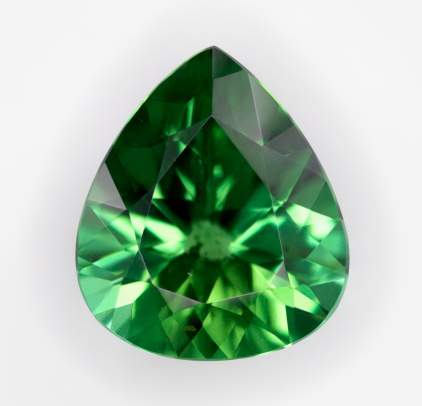 Their brilliance and neon lustre comes from the element copper, which no other tourmaline variety possesses. The German Foundation for Gemstone Research has found a high gold content in Paraiba gems, equating to 8.6 parts per million, but it is the copper content that gives it an electric, neon fire that can also feature varying levels of hues and saturation.

The combination of both copper and manganese found within Paraiba creates the range of entrancing colours, including neon greens, turquoises, electric blues, deep sapphire hues, purple-blues and reddish-purples. The manganese trace element causes the reds and purple shades, whereas a higher concentration of copper causes the more sought after dazzling blues, greens and turquoises.

The Singhalese phrase ‘Tura mali’, meaning ‘Stone of Many or Mixed Colours’ is an apt description of this magnificently coloured gem. In ancient Egyptian folklore, it was said that Paraiba passed through a rainbow on its journey to the earth’s surface, which is why it is also often described as the ‘Rainbow Gemstone’.

Paraiba tourmalines were first discovered in the 1980’s in the Paraiba region of Brazil. This Brazilian Paraiba gems variety has a vibrant neon or electric quality because of their fascinating glow. Brazilian Paraiba is usually heavily included (containing inherent inner cracks), but it is these inclusions that give the gemstone its vivid quality.

In 2001, copper containing tourmaline was discovered in Nigeria. While these specimens are paler and less saturated than the Brazilian gems, they have fewer inclusions.

More recently, copper coloured tourmaline was discovered in Mozambique that appeared similar to Brazilian Paraiba tourmaline – it also has less inclusions and is found in larger sizes. This variety is less expensive than the top quality Brazilian gems, but is brighter in colour and considered superior than the Nigerian Paraiba.

Paraiba tourmalines are expensive and even rarer than diamonds as they have only been found in the copper rich regions such as Brazil, Nigeria and Mozambique. They are also difficult to mine as the mining is done mostly by hand with manual tools.
Paraiba Tourmaline Buyers Tips

· Brazilian Paraiba tourmalines are one of the world’s rarest and most sought after gemstones, but also one of the most expensive. They are evaluated and priced according to the colour, cut, clarity and carat weight.

· The amazing variety of colours in Paraiba is arguably unmatched by any other gemstone.

· The most valuable and prized Paraiba tourmalines are those with a ‘neon blue’ colour and a good cut as this will enhance its glow.

· Natural inclusions in Paraiba tourmaline produce its vivid quality, and the higher the copper concentration the more radiant its blue hue.

· Paraiba tourmaline is almost exclusively cut in a faceted shape to best display their unique fire and brilliance.

· These wonderful gems are often heat-treated to lighten their colours somewhat and also to remove “silk” (a form of natural imperfection /inclusion).

· Modern heat treatments and a good cut will eliminate the less desired red to purple colouration in Paraiba.

· Paraiba tourmalines are sold by weight and not by size.

· Larger specimens are more expensive per carat because they rarer than the smaller Paraiba stones.

· Because the current known supply of Paraiba is close to depletion while demand is still increasing, obtaining this incredible gemstone would be a wise investment.

· Tourmaline (regardless of variety) is rated at 7 – 7.5 on the Mohs Scale of Hardness, making it highly suitable for use in jewellery since this makes it durable enough to be worn daily.

Paraiba tourmaline is considered to be one of the two birthstones for the month of October and is also one of the zodiac gems for Libra and Scorpio.

These superb gemstones are believed in many cultures to bring peace, tranquillity and emotional purification. They are further thought to be beneficial in diseases relating to the heart and throat, as well as to children with hearing and speaking disorders.

Rare Paraiba tourmaline features a colour, brilliance and luminosity that is virtually unrivalled. Thanks to online retailers such asTJC, everyone can now own one of these magnificent ‘neon’ gemstones regardless of their budget.

Author Bio: Julia Littlewood is a Jewellery Designer. She is passionate about ornaments, gems and stones. If you want to explore the most vibrant and widest range of jewellery pieces , she suggests you to visit The Jewellery Channel. Julia loves joining parties, fashion shows, exhibitions apart from designing costume jewelleries and writing articles for her followers.

To know more about Julia and make her a friend add her to your G+ circle.

You need to be a member of Jewelry Makers Network to add comments!